An early version of a finished garment made up in cheap material so that the design can be tested and perfected.

I read a lot of sewing blogs and I am amazed at how much toile-ing goes on out there.  Am I alone in being someone who doesn’t toile?

Of course, I understand the principle of making a toile so that you can hopefully get a pattern which ensures a perfect fit before committing scissors to your best fabric.  And I can totally see that if you were developing a pattern from scratch you would need to make a muslin to see how the design is progressing and will work in practice.  In fact I went to the Yves St Laurent exhibition ‘Style is Eternal’ several years ago and a whole room was devoted to calico toiles of his designs.  I could appreciate that these were used to try out design features such as pocket  and button placement (it was very cute seeing buttons made of calico).

For commercial patterns however I much prefer to take my measurements and compare these to the paper pattern, making adjustments to that before I cut out.  Then I like to do the fitting and alterations on the garment as I go along.  I think the thing is that fabrics behave so differently.  How many times have I cut main pieces and lining from the same pattern only to sometimes find they are slightly out usually due to the weave of the material be it loose or tight or possibly due to the texture of a particular fabric.  So I guess what I’m saying is that you may make a toile in one fabric and find that it fits perfectly but when using a different fabric for the proper garment find some differences occur.  I do remember a Vogue skirt I made years ago.  I used a lightweight woollen fabric for the first skirt I created with the pattern.  It made a fabulous skirt that fit and felt perfect.  As I loved that skirt I decided to make another but this time in a cotton weight fabric.  However, the fit was completely different.  I didn’t love it as much as my first one.

I think I have made precisely two toiles in my life.  One was for the first pattern I drafted for a Victorian jacket using an original Victorian pattern.  Although I drafted by bust size I was wary of Victorian sizing even then so did sew a mock up.  It actually came out true to size but the instructions for the drafting of the patterns include a lot of measuring of the flat pattern and removing or adding any extra to back length, darts,  etc, so they work out surprisingly well.  My other toile was a jacket I was making for a friend and wanted her to see the style I was contemplating.

I can’t see me changing my mind this late in my sewing career and so far I can’t say I have had any major disasters from not toile-ing.  Maybe I think life is too short to toile.  How about you?

As mentioned in my previous post I have been feeling very nostalgic for the seventies just lately.  It has been interesting reading the year by year take on the decade by the Steely Seamstress which brought back a lot of memories.

Making my own clothes was a big part of my life in the seventies. In fact I think making clothes for many people was a given as it was one of the few ways to get cheap fashionable clothes as the ubiquitous Primark did not yet exist (although there were the fantastic Chelsea Girl boutiques). I suppose it helped that Domestic Science (Syllabus B), (in other words Needlework) was still on the school curriculum and you were taught the basics of dressmaking right from the word go from how to read patterns to sewing samples of seams etc.

One of the first things I made was a smock dress and I choose a plaid fabric for the yoke. Talk about being thrown in at the deep end but I had the most fantastic, wonderful needlework teacher who showed me the importance of pattern matching.

Unfortunately I only have a few of my original seventies’ patterns but this skirt pattern is one of the first I bought and I always have a chuckle when I see the length of the legs on the envelope cover drawings.

Recently I set myself the task of scouring websites to see if I can find any photos of my favourite seventies’ makes. I remember making this short sleeved jacket in a white drill to go with a pair of red M and S Oxford bags.  I struggled with the square front panels and lapels with it being my first ‘tailored’ item and at that age I was not the mad perfectionist I am today. 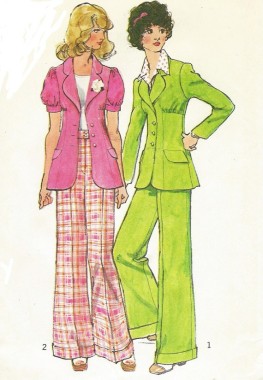 I recall making a brushed flowered cotton dress similar to this style (version 1) but I did cut out two left sleeves (forgot to flip the pattern). It was a learning curve and who knew the difference when I wore it anyway.  The high neck dress with puffed sleeves and a tie belt at the back was a popular silhouette in the early seventies.

There was a definite forties’ revival thing going on in the seventies with lots of pencil skirts and shirt dresses. This pattern was hugely popular with all the girls at school and we quite often shared patterns. I made this in a gorgeous small flowered turquoise seersucker with white collar and cuffs.  That tie belt was featuring again. 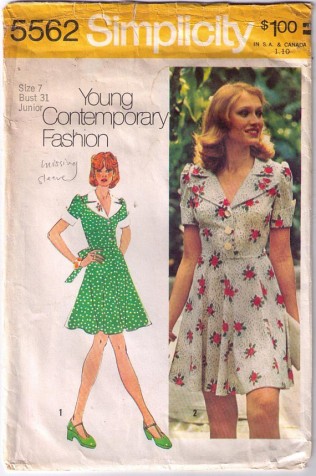 I was so excited to find this pattern in a vintage shop recently for £1. It was probably my most favourite make of the seventies because if fit like a dream. My version was made in dark blue corduroy and I wore it with a checked cheesecloth shirt. Cheesecloth was the fabric of the mid seventies, right?, except it shrank every time you washed it and to be honest was a bit scratchy on the skin. 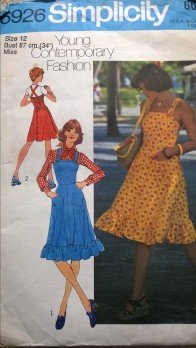 I’ve started to pick up a few more seventies’ patterns to add to my collection. Here are two finds. I think the two piece does reflect that forties feel with its flying jacket design and wide legged trousers and of course pinafore dresses/sundresses, depending on how your wore them, were de rigueur in the seventies. 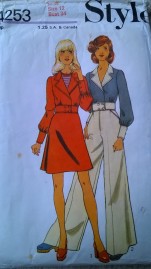 Style and Simplicity were the main pattern companies of the seventies, although I did treat myself to a few Vogue patterns.  I was also recently bequeathed a whole heap of seventies’ Burda magazines but I have to say I am slightly disappointed with these as the majority of styles are a bit matronly although there are a few gems if you look past Burda’s fabric choices. Burda did choose the dress on the cover of their November 1975 issue below to feature in their vintage Seventies Special. As an aside I do love looking at the hairstyles, shoes and accessories used in the Burda photoshoots.

I think seventies’ fashion often gets a bad press sometimes which is totally unjustified. I may be biased but the seventies is one of my favourite decades for fashion and I think the fact that current fashions are still referencing them is testament to that.

Sewliloquy is a place for me to write down thoughts about my sewing projects and other related sewing topics.  You are welcome to share them.