This is a project I have had in mind for while and seeing the Refashioners’ contest gave me the impetus I needed to get started. The challenge, outlined on Portia Lawrie’s Makery blog, is to upcycle or refashion a garment, textiles, accessories, etc, to create an item you have been inspired by. When I came across the photos below of an Alexander McQueen corset during an internet search I was intrigued that it did not look like a traditional corset and seemed to be a cross somewhere between corset, waistcoat and Wrangler/Levi jacket. However, the rounded elongated centre front sections appear to emulate the spoon busk corsets of the late 1800s and the garment also has an armour like feel reminiscent of the tight cuirass bodices, again popular in the late 1800s, which were named after a piece of close fitting medieval defensive armour worn over the torso and chest. The distressed look and use of leather hardware particularly appealed to me and I wondered if I could replicate its style imagining it in a white denim with tan top stitching.

It is often difficult to get the exact fabric you visualise for a garment but when I came across a pair of white denim jeans in a charity shop, on their £1 sale rail of all places, I scooped them up with this corset in mind. As they were a size 10 long there was some extra fabric to play with for an upcycling project.

I browsed my back catalogue of Burdastyle patterns to find one I could use for the basis of the corset and settled on style 112 size 38 from 07/2008 as it had centre pieces which would be perfect for creating the elongated fronts. I had do some tweaking with the pattern including creating a v neck and yokes, the said elongated front pieces, shortening the pieces to just below waist length, adding more curve to the side seams and finally creating my own collar and cap sleeve patterns.

All in all I needed to cut out 17 pieces from the jeans but some unpicking of seams was required to acquire extra fabric plus piecing of the side back pattern. All pattern parts were cut out with scant 1/4 inch seams. I decided I could reuse the unpicked belt loops on my project and so matched up the topstitching thread to that on the original garment which was fortunate to be the required tan. 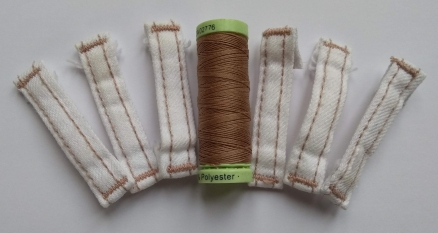 I did need a few reels of thread to create the myriads of topstitching this garment calls for. I originally tried using one of my wider double needles as I hoped this would speed up the topstitching process but my double needle kept shredding the topstitching thread and so I had to resort to a single size 16 needle and rely on eye to create the double rows. They may not be entirely perfect (in fact they are not on the original McQueen corset either) but that was not the look I was after and there is charm in the imperfections. 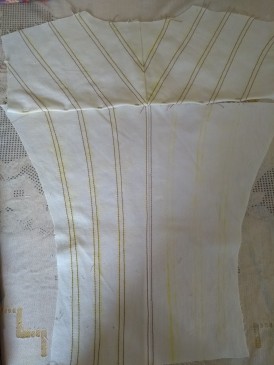 Ideally I would have chosen an antique brass metal zip but I had a 16 inch silver metal open ended zip lurking in my stash which was perfectly suitable for the project. I attached a strip of the white denim to the zip puller as per the original. Before attaching the leather strips and boning I machine washed the garment to create the frayed edges as this process had previously worked well on some denim shorts. It was nerve wracking cutting into the collar and sleeves but it had to be done! 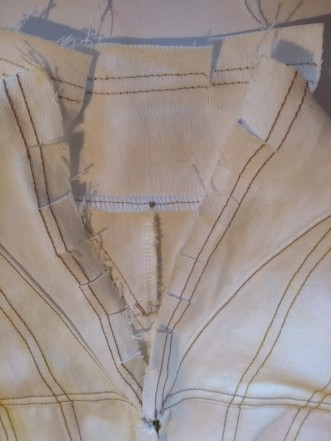 A corset implies boning and this is when it would have been useful to handle the original item and see which seams had been boned. It may well be that all the vertical seams are boned as in a traditional corset but some of the seams do not look to have that rigidity about them. The denim fabric provides a fairly solid garment. I toyed with putting boning in the front panels but decided the zip and leather provided enough structure and boning might be uncomfortable when sitting. In the end I settled on just boning the side seams. I used rigilene boning because I had some spare strips left over from previous corset making. I normally make boning channels using a wide seam allowance (at least 5/8 inch) but in this case did not have that luxury. The beauty of rigilene boning is that it can be sewn through and so I decided to securely zig zag the boning to the insides of the side seams before topstitching them down.

For the leather strips at centre front I used a leather belt also gleaned from a charity shop for £1. I already had a leather belt I wanted to use on the corset which has a curved buckle echoing the one on the McQueen corset and so I was pleased to find a leather belt in almost the same shade of brown. It was actually a rather nice leather belt and I felt guilty cutting into it but needs must. I cut out two 3/4 inch wide by 16 inch long strips. There was some curvature in the back of the belt from wear which made it quite difficult to cut entirely straight strips.

I had some brass dome claw studs but the claws were too short and delicate to go into the leather so after racking my brain I remembered I had a pack of copper colour rivets lying around. As the pins are designed to go through several layers of denim on jeans they were perfect for my leather trim. I had 17 rivets left and so it had to be 8 rivets on each strip. I marked the rivet placements using an expander gadget. 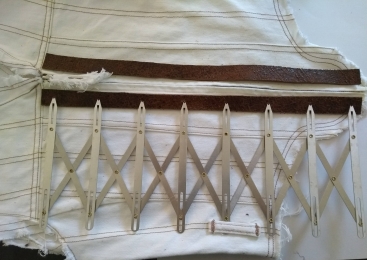 I’m not really a gadget person but I recently bought the expander to help with eyelet placement on corset construction. If you read my blog on the fan laced corset you will see that it means I can skip the maths part when working out where to put eyelets! I marked the top and bottom rivet placement and stretched the expander out between the two and hey presto it shows where to mark the others equally. I had to create the holes for the rivets but my punch would not work on the thick leather and so I had to resort to an awl and hammer. The rivet and attachment pin are then loaded in the insertion device provided and more hammer whacking later the studded strips were completed ready to be sewn onto either side of the zip. I did wonder whether I would be able to sew the leather strips to the garment as the leather is quite sturdy in addition to two layers of denim. As I don’t have a leather needle for my sewing machine I stuck with a size 16 using the longest stitch length and also a piping foot to avoid the rivets. 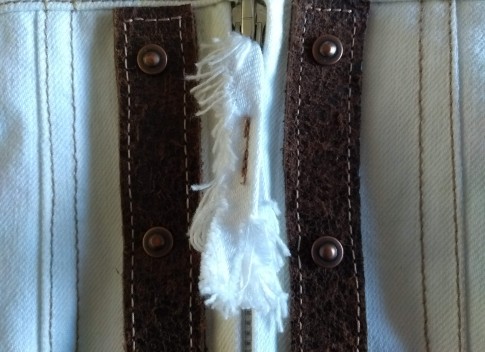 It’s been a bit of a time consuming project from having to create the pattern, fiddle with the cutting out, sewing all the top stitching, washing and riveting but overall I am very pleased with the end result.

Processed with VSCO with a6 preset 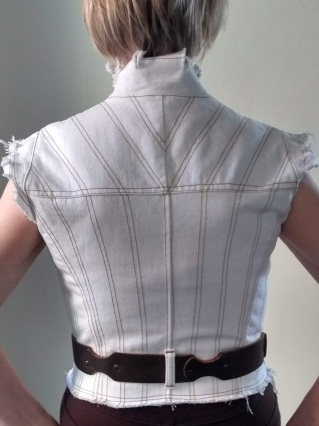 Sure there are tweaks I would make if I were to repeat the project but as with all upcycling challenges there were constrictions regarding the amount and shape of the fabric available. These photos show the piecing of the side back panel. It sits on the waist line and so looks part of the design but is also hidden by the belt. Three of the belt loops were sewn back on and matched the topstitching perfectly.

Here is a photo of the leftovers. I shall be removing the zip from the jeans to add to the stash. Both ends of the belt remain. The large buckle is lovely and I am sure I will find a use for it. In fact I actively hunt down belts in charity shops to obtain nice buckles as they are so expensive to buy new. The leather scraps will also come in useful for creating small details on corsets and waistcoats for example.

Finally I must say thank you to my valiant sewing machine (the Janome Sewist 525S). I know I complain about its little foibles but overall it is a good little work horse and has coped admirably with thick layers of denim and leather.

Sewliloquy is a place for me to write down thoughts about my sewing projects and other related sewing topics.  You are welcome to share them.